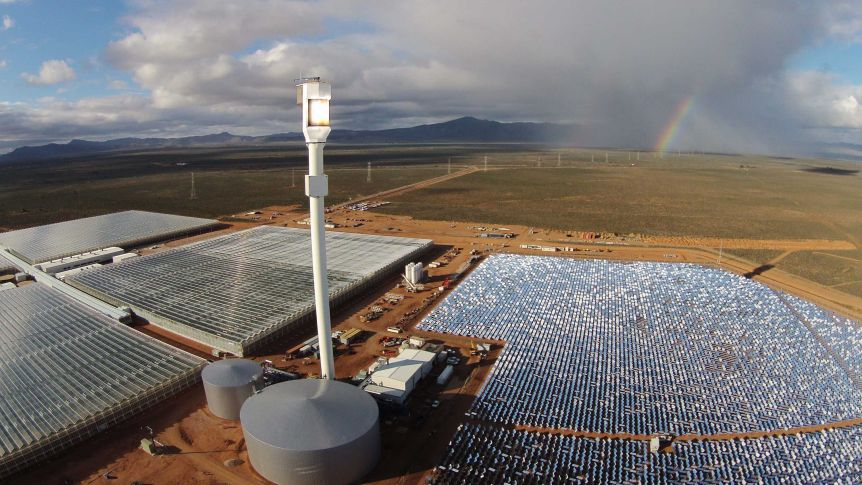 Conventional agriculture is resource and energy intensive. Plants need the right kind of soil, nutrients, water and sunlight to grow and thrive. This implies that places that are too dry or hot are considered barren and unsuitable for agricultural activities.

“Farming as usual” can no longer satisfy global food demand. Existing farming practices are largely unsustainable and put increasing pressure on limited land and other resources. According to estimates, by the year 2050, rising populations will cause a 50% increase in food demand. However, climate change continues to increase the number and severity of catastrophic weather events and water scarcity is becoming more acute in arid regions, all posing a threat to agriculture and food security.

If things don’t change the world faces a bleak future. We need to look at alternative ways to create energy and to produce food. That’s no longer a preferred option but a necessity.

Fortunately, however, things are changing.

Futuristic Agribusiness Sundrop Farms decided to take up the challenge of farming in the desert. It opened its first farm in Port Augusta, South Australia in 2010 where it began testing and experimenting. With no fresh water, degraded pastureland and an unforgiving climate, it seemed like an impossible task. However, undeterred, the company invested in research and development, trial and error, failures and finally achieved success proving that its dream was achievable.

Later in 2016, the company completed its 20-hectare state-of-the-art greenhouse. The facility only uses sunlight and seawater to grow a variety of produce – tomatoes, cucumbers, peppers and more. It uses a state-of-the-art solar tower to produce energy to power the plant growing systems and to heat and cool the greenhouses as required. It is 115m high and has 23,000 mirrors used to capture sunlight and direct it to the central receiver at the top of a 127-metre “power” tower. Its water comes from the Spencer Gulf and is desalinated using their cutting-edge thermal desalination plant. At its peak it produces 39 megawatts of thermal energy, which is used for electricity, heating and making water.

The facility produces about 17,000 tonnes of truss tomatoes a year using only sea water and sunshine as part of efforts to curb waste and energy on farms. It holds a 10-year supply contract with Coles Australia and can be found in stores across the country. The greenhouse does not use soil, pesticides, fossil fuels or ground water either. The company has expanded and established pilot plants in Tennessee, USA and Portugal.

Sundrop Farms is grateful for the support that it received from government, construction and its debt and equity funding partners. It also appreciates the discerning palate of its customers, who recognise that their fruit and vegetables aren’t just grown differently, but also taste more delicious than most of its competitors.

Its processes don’t consume water, they create it. Its desalination process produces freshwater that is pure and distilled, with no need for chemical treatment.

Sundrop Farms uses sunlight to cool, heat and run its growing environments, so they are not adding to the world’s output of C02.

By turning to abundant, renewable inputs like sea water and heat from the sun, they don’t pass on volatile energy and water costs to costumers.

Where traditional agriculture methods struggle to produce, Sundrop Farms can grow fruit and vegetables in abundance. In previously barren areas its yields are 15-30 times higher per hectare than conventional field production.

Our way of growing lets us farm close to end consumers. So there’s no need to transport food over vast distances. That means that everything is fresher too.

They train people in the latest growing practices, employing over 150 at their Australian facility alone. Across the world, they’re creating meaningful careers for people in sustainable agriculture.

As well as using carnivorous insects to control pests, they’ve also found that they don’t like the saltwater that they use to help keep their greenhouses cool.

The way they grow fruit and vegetables is beneficial for the planet and for business too. It’s also good for consumers, as it’s rich in vitamins, minerals and fibre, and low in fat and sodium. Even better, it tastes delicious.

Planet as the bottom line

Sundrop Farm firmly believe that business should be a force for good and benefit more than its shareholders. So, as well as being in profit, its mission is to also benefit the environment and the local community in which they operate. It takes all three bottom lines “People, Planet and Profits” seriously.

The price people pay for food isn’t its true cost. To add that up, you need to include all the negative externalities of traditional agriculture. By using renewable inputs in its production of fresh fruit and vegetable, they’re creating a benefit for the environment and restoring ecosystems, rather than depleting them.

Sundrop have transformed agriculture. They are now showing the world that we can grow delicious, mouth-watering produce without needing fossil fuels, vast amounts of fresh water and thousands of acres of cultivated farmland.

In other words, they are breaking farming’s dependence on finite resources and limiting competition for these resources.

Equally important is the fact that Sundrop technology doesn’t exploit nature, it works in harmony with it. They use it to harvest solar power to supply them with energy. Hydroponic greenhouses that don’t use soil encourage the plants they grow to flourish. Water treatment creates fresh water from the sea or brackish sources to irrigate their crops.

All they need is sun and seawater to grow food all year round. With no need to rely on the weather or soil quality, their methods provide economic and community benefits, and are better for the planet too.