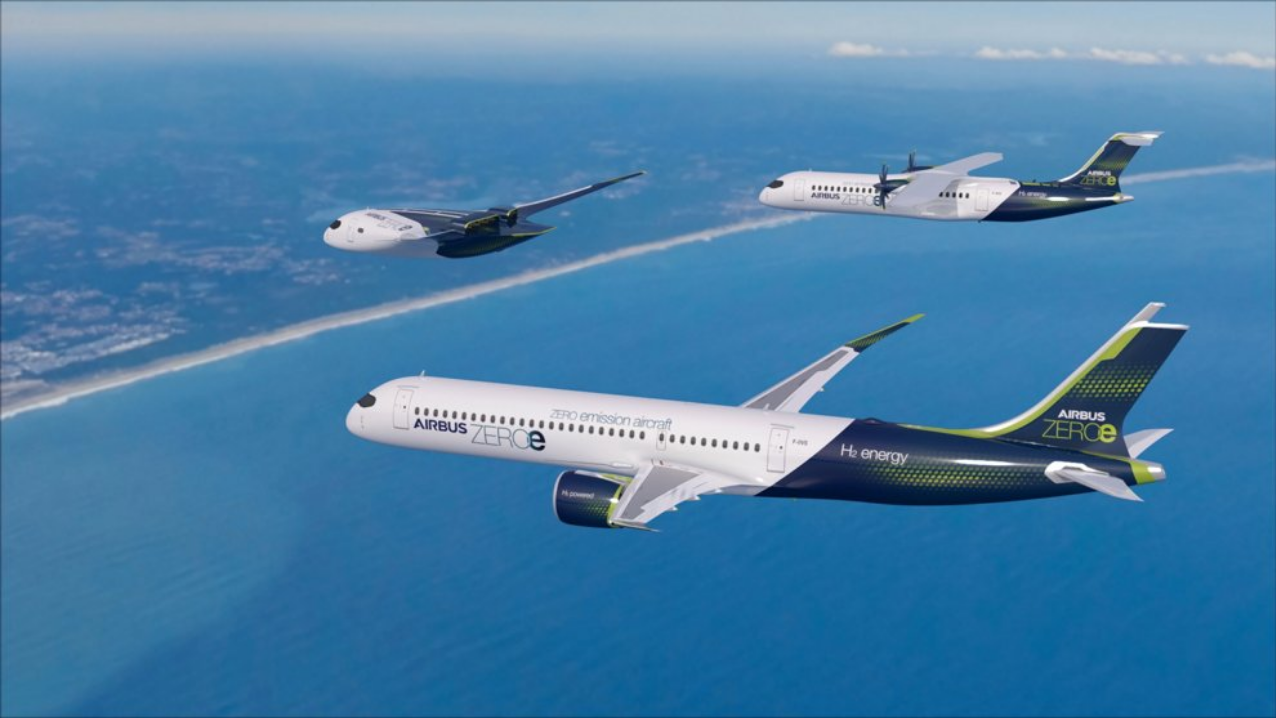 Air travel makes it possible for many people to work, study or visit many other parts of the world. However, there have been concerns about its associated emissions and contributions to climate change.

The United Nations aviation body forecasts that airplane emissions of carbon dioxide, a major greenhouse gas, will reach just over 900 million metric tons in 2018, and then triple by 2050. Overall, air travel accounts for about 2.5 percent of global carbon dioxide emissions.

A study found that the rapid growth in plane emissions could mean that by 2050, aviation could take up a quarter of the world’s “carbon budget,” or the amount of carbon dioxide emissions permitted to keep global temperature rise to within 1.5 degrees Celsius above preindustrial levels.

Aviation giant Airbus has unveiled three visual concepts for “zero emission” airplanes to be powered by hydrogen. This is the plane maker’s latest effort to draw public attention to its “zero-emission” ambitions as European governments push for cleaner technology in their post-COVID recovery plans.

Airbus has set itself a deadline of 2035 to put a carbon-free commercial aircraft into service.

The European aerospace company revealed three different aircraft concepts that would be put through their paces to find the most efficient way to travel long distances by plane without producing the greenhouse gas emissions responsible for global heating.

The first of the Airbus concepts could carry between 120 and 200 passengers more than 2,000 nautical miles by using a turbofan design that includes a modified gas-turbine engine running on hydrogen, rather than jet fuel, which could be stored in tanks located behind the plane’s rear pressure bulkhead.

The second concept, a turboprop design, would also use a modified gas engine but could carry up to 100 passengers for 1,000 nautical miles on short-haul trips.

The aviation giant’s plans also include a plane with an “exceptionally wide” body that blends into the plane’s wings to open up multiple options for hydrogen storage and the cabin layout. This plane could carry as many passengers as the turbofan design and travel as far too.

Unlike normal planes, the engines would be adapted to burn liquid hydrogen stored in the rear fuselage. All three of the aircraft concepts rely on hydrogen as a fuel because the only emissions produced when it is burned is water vapour, making it a clean fuel option for heavy vehicles such as planes, trains and trucks.

At the same time, Airbus is working on a demonstrator, with initial results expected in 2021. To meet its 2035 goal, Airbus would need to select technologies by 2025.

Challenges include finding ways to safely store volatile liquid hydrogen during flight at very cold temperatures. Airbus dismissed concerns that hydrogen would be unsafe and has called for massive investment in new energy infrastructure.

While hydrogen has been discussed since the 1970s, it remains too expensive for widespread use. Proponents say infrastructure investment and rising demand will lower the cost.

The promise of a low-carbon economy has triggered plans to upgrade existing gas infrastructure to use hydrogen, and to produce the gas in a sustainable way.

A greener future is ready to land!