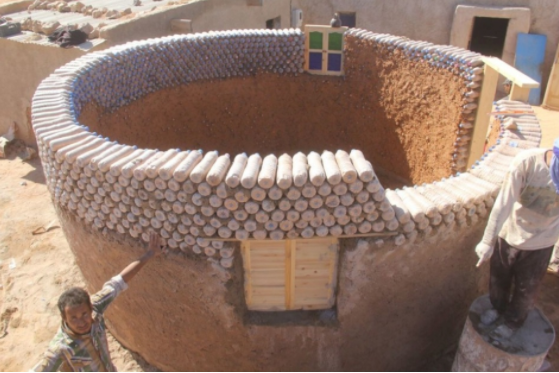 Although shelter is considered as one of man′s basic needs, many people around the world lack access to decent shelter. Many of such people are displaced persons who have had to flee from their homes and communities, eventually ending up in refugee and internally displaced persons camps.

One of such refugees is a young man Tateh Lehbib Breica who was born and raised in the Awserd camp in Algeria. For over four decades, the remote desert of southwest Algeria has hosted 90,000 Sahrawi refugees who fled fighting in the western Sahara war. Dispersed in five camps near the Algerian town of Tindouf, most of the refugees are forced to live in tents, mud-brick houses and other temporary or semi-temporary structures which offer scant protection from the harsh Saharan climate.

In the desert, temperatures can rise as high as 50oc in summer and drop below freezing in the winter. These extremes are accompanied by sandstorms and periodical heavy rains which wreak havoc on the lives and homes of refugees. In October 2015, torrential rain resulted in flooding ruining 17,000 houses and 60% of community infrastructure including Tateh′s grandmother′s home. The floods also destroyed 85,000 food rations.

While he studied, Tateh thought about finding an effective solution to the housing problem. He finally found his answer – discarded plastic bottles! He found that by laying the sand-filled bottles side by side like bricks he could build a house that could withstand the elements. He selected the circular shape because it protects against driving winds, while the bottle walls provide a thick, sturdy structure that withstands lashing rain. Traditional square houses can get buried during severe storms.

Once the main structure is built, the walls are covered with cement and limestone and then painted white to reflect the sun’s rays and keep indoor temperatures cool. Tateh who is an Engineer with a master’s degree in energy efficiency, built the first house for his grandmother using 6000 plastic bottles filled with sand and straw.

His project caught the attention of the UNHCR who invested €60,000 in his project for 25 housing units.

The major benefits of these plastic houses are:

COST: It takes an average of 5,500 plastic bottles to build each of these houses. Most of the bottles can be collected for free in dumps or at low costs.

TIME SAVINGS: A house of that nature can be completed in 7 to 12 days.

ENVIRONMENTAL-FRIENDLINESS: Plastic bottles which would have ended up in landfills or discarded indiscriminately in oceans are upcycled and used to provide durable housing for vulnerable people.

SUSTAINABILITY: These houses convert the hitherto problematic non-biodegradable property of plastics and put them into good use in these houses.

SOCIAL BENEFITS: Refugees and displaced persons can now access quality and affordable housing for a fraction of the cost of conventional structures. Locals can easily gain the skills required to construct plastic houses too.

The trend is catching-on and several people around the world are finding innovative ways to upcycle plastic bottles and other plastic wastes into boats, furniture and other items.

Through initiatives like this, Tateh is providing homes and protecting the environment, one bottle at a time!

So, what do you think? Would you consider living in a plastic home or building one yourself?

Meet the refugee building homes out of discarded plastic bottles