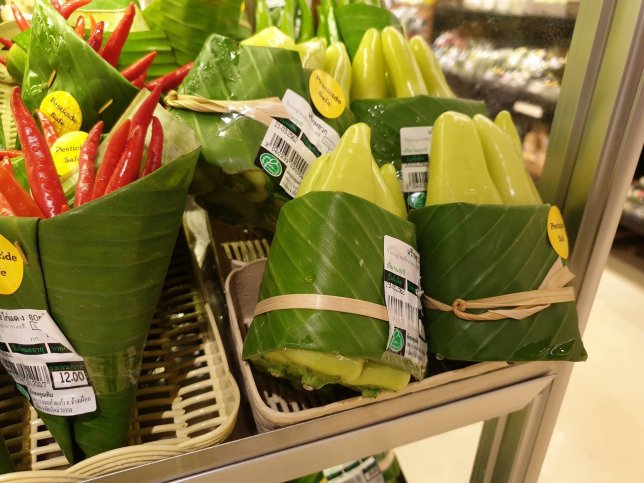 The practice of using banana leaves for wrapping is nothing new. Many communities in Asia and Africa have benefited from the size and strength of green banana leaves for many years. However, the convenience and affordability of plastics soon took over. But with growing awareness on the negative impact of waste plastic, banana leaves seem to be making a comeback. Cool, right?

Some supermarkets in Vietnam have borrowed a (banana) leaf from Thailand and are now using banana leaves instead of plastic as a packaging alternative. This is huge as this shift translates into a significant cut in plastic consumption in these supermarkets.

The trend seemed to have been borrowed from Rimping supermarket in Chiangmai, Thailand after a local firm praised the initiative on Facebook. The novel idea then caught the attention of some Vietnamese supermarkets such as Lotte Mart, Saigon Co.op and Big C. Aside from wrapping vegetables and fruits, some supermarkets plan to use the leaves for fresh meat products also.

Perhaps more encouraging is the fact that customers have been applauding this initiative. This demonstrates that people want businesses to make sustainability and environmental protection a priority.

This development is also useful because Vietnam was recently ranked fourth in the world for volume of plastic waste dumped into the oceans, disposing about 2,500 tons of plastic waste every single day!

Other countries in Asia are also making moves to cut plastic consumption. South Korea banned disposable plastic bags and requires supermarkets to provide recyclable containers to customers instead. In Singapore, supermarkets have launched a campaign urging customers to reduce plastic bag use while shops in Taiwan now charge for single-use plastic bags as part of efforts to discourage their use.

In Nigeria, banana leaves have typically been used as cooking wraps for moi-moi (steamed bean pudding) and other local delicacies. Recently, I went to a restaurant that also uses banana leaves to cook and serve their pounded yam. Its high time supermarkets in Nigeria also join the bananawagon.

Are you on the bananawagon? Hop on!