One of my favourite things today are Vertical Forests! Just imagine coming into a city and rather than being bombarded by only high-rise buildings and unbearable traffic, you actually see forests! Buildings covered with trees and plants that absorb carbon dioxide, filter dust from pollution, produce oxygen and reduce stress! Vertical Forests are also an ingenious way of planting more trees and creating habitats for wildlife in cities that are squeezed for space. Now talk about a breath of fresh air!

Various towns and cities across the globe are joining the bandwagon of Vertical Forests and the results are to say the least – amazing! Here are a few inspirations:

Popularly known as one of the world’s biggest polluters, with rocketing urban growth and an air pollution crisis, it is great to see China embrace Vertical Forests. Chinese cities have some of the most polluted air in the world. In December, 2016, air quality got so bad that 24 cities across north-east China were put on “red alert”. Schools were temporarily closed, flights were cancelled, vehicles ordered off the roads and residents urged to stay indoors until the smog eased.

This project is in the eastern city of Nanjing and consists of two residential high-rises at 110 and 76 meters with around 900 trees and over 20,000 smaller plants and shrubs. Scheduled for completion in 2018, the skyscrapers will hold 1100 trees from 23 local species and 2500 cascading plants and shrubs, which the architects say will provide 25 tons of CO2 absorption each year and produce about 60 kg of oxygen a day.

Boeri told The Guardian that while his vertical forest will only make a tiny difference in Nanjing, he hopes it will act as a catalyst for more green architecture projects.

“Two towers in a huge urban environment [such as Nanjing] is so, so small a contribution – but it is an example. We hope that this model of green architecture can be repeated and copied and replicated,” he said.

First of its kind, the Trudo Vertical Forest looks to be an example of how good architecture can tackle both climate change and urban housing issues. This forest tower is funded by a social housing project, and the tower will provide low-income housing. The tower will have 19 stories with 125 units, all covered in a luscious vertical forest that features a wide variety of plants and trees.

The high-rise building of Eindhoven confirms that it is possible to combine the great challenges of climate change with those of housing shortages. Urban forestry is not only necessary to improve the environment of the world’s cities but also an opportunity to improve the living conditions of less fortunate city dwellers”, said Stefano Boeri, the man leading the revolution.

Located in southern China’s mountainous Guangxi area, Liuzhou Forest City will bring nature to an urban setting, with over 40,000 trees and 1 million plants covering every building. Each year the trees will absorb 10,000 tons of CO2 and 57 tons of pollutants. They should produce about 900 tons of oxygen a year, too.

The architects behind the idea, Stefano Boeri Architetti, say the plants will also decrease the average air temperature, create noise barriers and boost biodiversity by creating a habitat for birds, insects and small animals. 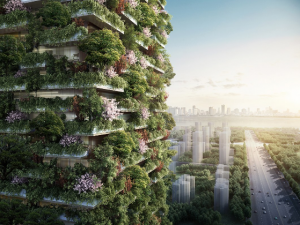 Stefano Boeri Architetti firm, which has offices in Shanghai, has even bigger plans afoot – forest cities. It has come up with a concept for the northern industrial hub of Shijiazhuang, one of China’s most polluted cities, which envisions a compact and green mini-city for 100,000 people with buildings of different sizes covered in trees and plants.

Today around 54% of the world’s population lives in urban areas – a proportion that is expected to increase to 66% by 2050, with most of the growth concentrated in Africa and Asia.

As more people move to cities, urban sprawl encroaches further into surrounding green space. Boeri conceived his vertical forests as a way of “giving back to nature the space we are taking from it”.

The concept of blending the green and urban environments has been attracting plenty of interest in recent years. New examples of vertical greenery are springing up around the world, from Singapore’s “Supertrees” to Sydney’s One Central Park.

Planners hope that building with vertical forests will also help to reduce urban sprawl, a growing problem as increasing numbers of people migrate from country to town. Over half of the world’s population now lives in towns and cities, and this number is expected to grow by just under 2% a year.

China is about to get its first vertical forest

Yes, you really can plant trees all over a city to make it cleaner and better