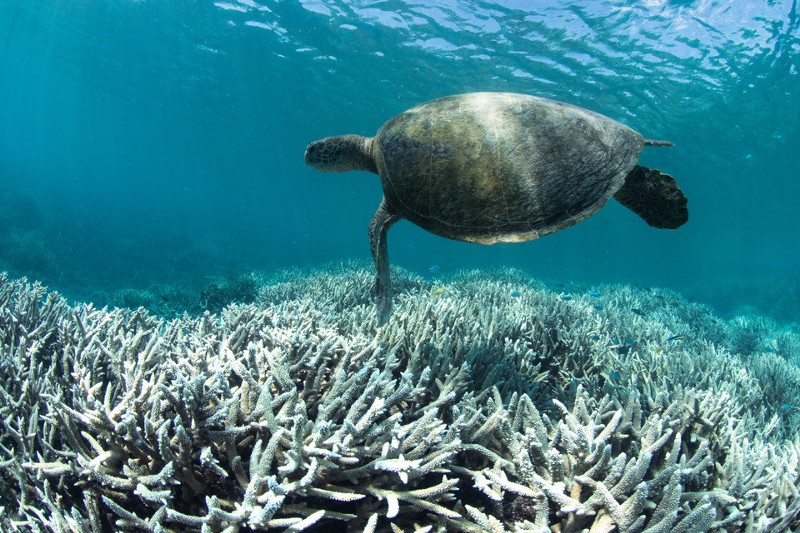 Oceans cover 70% of the earth’s surface. For a healthy planet, we need healthy oceans. Yet they are under threat. Here are five of the biggest challenges our oceans face, and what we can do to solve them.

Climate change arguably presents the greatest threat to ocean health. It is making oceans hotter, promoting acidification, and making it harder to breathe in them by reducing dissolved oxygen levels. Imagine how poorly a fish in an aquarium would fare if we turned up the heat, dripped in acid, and pulled out the oxygen bubbler. This is slowly but surely what we are doing to our oceans.

We can each reduce our own carbon footprint and help decelerate climate change by making smart choices about what we eat and how we travel. The carbon cost of a steak and shrimp dinner, for example, can be greater than driving in a low-emission car from Los Angeles to New York. With 7.6 billion people on the planet, these decisions add up. In our businesses, we can join companies such as Salesforce, Google, and Lyft in going carbon neutral.

We can all help by refusing single-use plastics such as straws, cutlery, and food containers. These are in our lives for seconds, but can then spend centuries circulating in our oceans, causing significant damage. Individual actions should be backed by international leadership. The G7 is considering a Plastics Charter that could be a game changer in curbing the flood of plastic pollution entering our oceans.

Almost a third of global fish stocks are overfished. Fish that were once extremely abundant, such as bluefin tuna, are now becoming increasingly endangered. Illegal, unreported and unregulated fishing can cost the global economy up to $23 billion annually. Restaurants and seafood markets in many areas routinely serve endangered seafood species that are the underwater equivalent of a rhino or a panda.

New apps, including Seafood Watch, can help us steer clear of these endangered species, and select sustainable and healthy seafood choices instead. Certain seafood sectors can also sustain serious human rights abuses such as child labour and slavery. Some of the same apps can help us avoid these humanitarian pitfalls.

We all know that parks and protected areas on land help wildlife such as bears, deer and elephants thrive. The same is true for underwater protected areas. In addition to preserving charismatic and ecologically important marine wildlife, including sharks, dolphins, and corals, protected areas in the ocean can act like a savings accounts for fisheries. Fish inside such areas grow larger and generate more offspring. These then spill beyond the boundaries of the protected area, and are harvested by fisheries as a return on their investment in the park.

We are behind the curve on setting up protected areas in the ocean. Today, only 2% of our global oceans are included in strongly protected marine parks. Scientists estimate we may need to protect 30% of the oceans to provide properly for the future of ocean wildlife and ocean health.

We need to back local, national and international efforts to set up more marine protected areas. Responsible travel also helps. The tourism industry can be both a key beneficiary and guardian of marine parks. We can reinforce these efforts by patronizing hotels that are financing marine park protection in their ocean backyards, by replanting corals and managing their footprint near these parks.

Every year, governments spend $35 billion on fisheries subsidies, the majority of which directly accelerate harmful overfishing. Subsidies lead to overcapacity in fishing fleets and allow vessels to fish harder for longer, even when it would not otherwise make economic sense. For example, a large portion of fishing on the high seas, where fish are an internationally shared resource, would likely be unprofitable without fisheries subsidies.

There is a crucial opportunity to take a firm stance on prohibiting harmful fisheries subsidies at the 2019 ministerial meeting of the World Trade Organization. We must urge our national leaders to reach an agreement to end subsidies, and promote a healthy future for fish and fishermen in our global oceans.

Listen to a podcast featuring Douglas McCauley on the key challenges, developments, and implications of the Fourth Industrial Revolution that are influencing the state of the oceans.