Plastic is everywhere! A lot more than we can actually handle. That is why every year, an estimated 8 million tonnes of plastics finds its way into the ocean. Humanity has a plastic bottle addiction – people around the world purchase one million a minute, and many bottles wind up in the ocean instead of recycling bins. Globally, only 14% of plastic packaging is collected for recycling, while most plastic packaging is used only once. In addition, 95% of the value of plastic packaging material, worth between $80 billion and $120 billion annually, is lost to the economy.

This is why some individuals and organisations are working towards tackling the world’s plastic problem. One of them is a Cameroon-based nonprofit Madiba & Nature who are pioneering a creative use of plastic to produce boats. They fabricating floating canoe-shaped crafts out of collected waste plastic bottles that would probably have ended up in the sea. 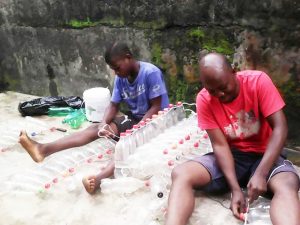 These group of students aim to promote a circular economy in Africa; according to their website: “…we want to help change people’s attitudes and bad habits on the management of plastic waste that degrades sensitive ecosystems.” The boats were invented by Cameroonian Essome Ismael who now inspires and trains others to transform plastic trash into boats.

Madiba & Nature volunteers also gather to pick up thousands of plastic bottles near Cameroon’s largest city, Douala, to use those bottles for what they call ecological canoes. The boats could help not just the environment, but the local community as well. In a video, Ismael said there’s a great need for fishing boats in his area, and the plastic bottle boats could meet that need. Local fisherman Emmanuel Japa said at first they thought the plastic bottle boats were a joke, but it turns out the crafts are actually strong and seaworthy. Ismael also said plastic bottles clogging their waterways have led to flooding in the local area.

Check out the video:

The boats are just the beginning. Madiba & Nature’s website says in around a year of work, they’ve started a program for students and engineers to learn more about green business, and have developed an environmental awareness and education program. They’ve also helped develop a local waste management system and have supported other groups laboring to protect the environment. Their website also says they aim to research how to use recycled plastic in building or paving systems.