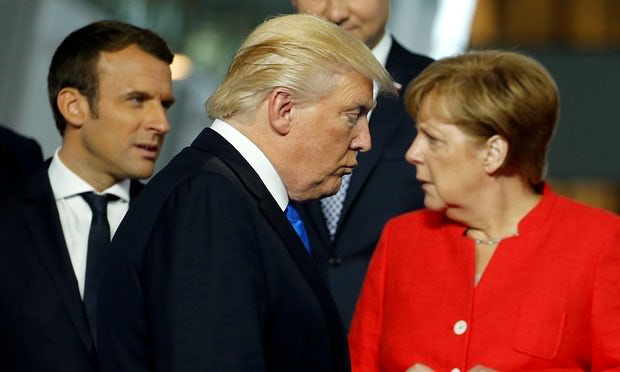 No matter how many signs you see, or how long you have known, a breakup is always painful. You just can’t prepare your heart enough to hear those painful words, “I’m leaving!”

That sort of sums up President Trump’s recent decision to go ahead and pull the U.S. out of the Paris Agreement on Climate Change. For anyone who followed the Trump campaign and subsequent comments and appointments in office, the writing on the wall has always been clear. However, many stretched their optimism in hope that he wouldn’t go through with the idea.

In his speech, Trump said “It is time to put Youngstown, Ohio; Detroit, Mich.; and Pittsburgh, Pa. … ahead of Paris, France.” He framed his decision to pull the U.S. from the Agreement as “a reassertion of America’s sovereignty”, adding he was “elected to represent the citizens of Pittsburgh, not Paris.” 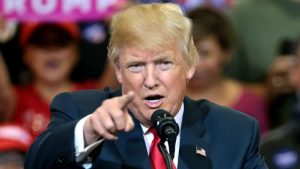 Below are reactions from world leaders:

“Simply put, the private sector already chose a low-carbon future. And for the nations that committed themselves to that future, the Paris Agreement opened the floodgates for businesses, scientists, and engineers to unleash high-tech, low-carbon investment and innovation on an unprecedented scale.

The nations that remain in the Paris agreement will be the nations that reap the benefits in jobs and industries created.  I believe the United States of America should be at the front of the pack.  But even in the absence of American leadership; even as this administration joins a small handful of nations that reject the future; I’m confident that our states, cities, and businesses will step up and do even more to lead the way, and help protect for future generations the one planet we’ve got.”

“Removing the United States from the Paris agreement is a reckless and indefensible action. It undermines America’s standing in the world and threatens to damage humanity’s ability to solve the climate crisis in time.” 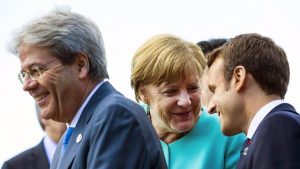 “The Paris agreement remains a cornerstone in the cooperation between our countries for effectively and [in a timely manner] tackling climate change and implementing the 2030 agenda for sustainable development goals.

“We deem the momentum generated in Paris in December 2015 irreversible and we firmly believe that the Paris agreement cannot be renegotiated, since it is a vital instrument for our planet, societies and economies.”

“China will continue to uphold its commitments to the Paris climate agreement.… We realize that this is a global consensus agreement and that as a big developing nation we should shoulder our international responsibility.”

“We do not have the right to spoil the environment for future generations. …. That is, morally speaking, a crime on our part.”

“It cannot stand; it’s not right, and California will do everything it can to not only stay the course, but to build more support — in other states, in other provinces, in other countries.”

“Climate change is a fact of life that people in Los Angeles and cities around the world live with every day. It is a grave threat to our health, our environment, and our economy — and it is not debatable or negotiable. …

“With the President pulling out of the Paris Climate Agreement, L.A. will lead by committing to the goals of the accord — and will work closely with cities across America and the world to do the same.” 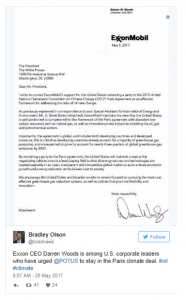 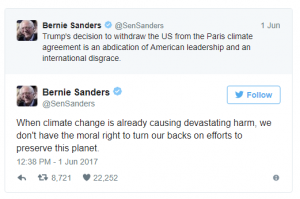 “Today the president announced that the United States will no longer be bound by an agreement unilaterally entered into by the Obama administration. This was neither submitted to nor ratified by the U.S. Senate, and is not in the best long term economic interest of the United States.

“Instead of preaching about clean energy, this administration will act on it. Our work and deeds are more important than empty words. I know you can drive economic growth and protect the environment at the same time, because that is exactly what I did as governor of Texas.”

“I applaud President Trump and his administration for dealing yet another significant blow to the Obama administration’s assault on domestic energy production and jobs.

“President Obama made commitments in this deal based off a costly power plan that we knew at the time was on shaky legal ground. By withdrawing from this unattainable mandate, President Trump has reiterated his commitment to protecting middle class families across the country and workers throughout coal country from higher energy prices and potential job loss.”

I join my voice to many other around the globe to condemn the decision. The earth is our home and a common wealth, and we all have an obligation to protect, cherish and nurture it above all else. The interests and well-being of the environment must be placed above local and national interests, and well above economic considerations.

What is your opinion or reaction? Please share below.

REACTION TO PRESIDENT TRUMP’S DECISION TO PULL THE U.S. OUT OF THE PARIS AGREEMENT