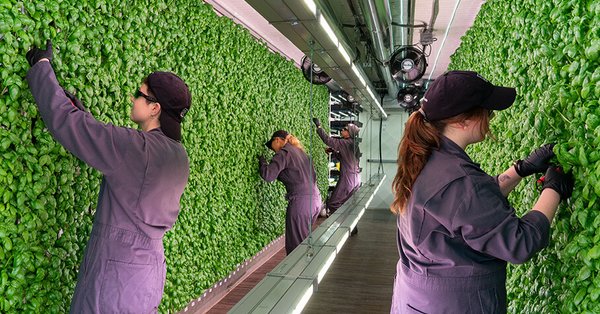 Climate change will impact many spheres of human life. It is estimated that rapid climate change could put millions of traditional farmers out of business. If proactive measures are not taken now, this could exacerbate conflict and competition for limited land, water and other resources.

One of such measures is the promotion and adoption of indoor farming. Although vertical farming was first introduced in the early 1900s, it was recently popularized by Despommier who began teaching a class at Columbia called Medical Ecology over 20 years ago.

Vertical farming is an indoor farming method in which crops are grown in stacked layers, often without soil. The practice is becoming more popular and important as urban populations grow dramatically and available farmland decreases. While vertical farming isn’t a new concept,these eco-friendly indoor farms are now rapidly expanding and getting more attention.

Founded by Kimbal Musk in 2016, Square Roots is an an indoor urban farming company based in Brooklyn. Square Roots’ mission is to bring fresh, local food to cities around the world by empowering younger generations to participate in urban farming.

Since its inception, the company has grown more than 120 varieties of crops, including greens, vegetables and strawberries. It plans to open a Square Roots “Super Farm” — with 25 climate-controlled shipping containers, cold storage, biosecurity infrastructure and everything else needed to run a vertical farm at scale. Square Roots’ quality fresh produce are grown without pesticides or GMOs and are available at grocery stores and restaurants in the same communities where they build their farms.

It is building a scalable farm-tech platform to enable the sustainable, distributed and resilient food system that our near-future needs. Its farmers work in harmony with their technology to grow real food, predictably and consistently, in any location, all year round. Their cloud-connected farms and data-empowered farmers are constantly learning from each other, finding new ways to grow more food with fewer resources.

One of the appeals of vertical farming is that more people want local food because they have lost trust in industrial food systems that offer lower calories, lower nutrients from food that is transported from thousands of miles away with little transparency on how it was grown. Also, growing global population and urbanization poses a threat to existing supplies of food, forcing the industry to figure out new ways to grow food quickly.

One of the major promises of indoor farming is that cities will soon be able to grow most of their food within the city. Another major advantage is that even if the farms fail, the farmer can start again and plant new crops within weeks unlike in traditional agriculture where they may have to wait for the next farming season.

Vertical farms like Square Roots have no doubt taken their place in the future of farming.

What else do you see in the future of farming?